Maps in Games was founded in 2011, showcasing the maps and wayfinding tools which guide our protagonists through the diaspora of game worlds. The project — which started out on Tumblr — features examples found by the author, and by contributors.

The maps and signs are all captured from within the game, as they are originally presented to the player. Although asset dives might also be interesting, our primary goal is to highlight how the maps are used and seen in their original context. We’re also only interested in maps which sit ‘within’ the world, and so we never feature player HUDs or map screens.

This project was the subject of a VideoBrains talk in 2015, entitled “Zones 1, 2 & Green Hill“. A zine may also be in our future. 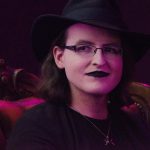 Gemma Thomson is a game designer, transit enthusiast, amateur cartographer and hobbyist photographer. Railways and graphic design often play small but detailed parts in the work she creates, and so she took it upon herself to highlight examples of when other games feature the same detail.

Gemma resides in Stockholm with a dated SL transit map on the wall, and a partner who’s now accustomed to gaming sessions peppered with screenshot breaks.