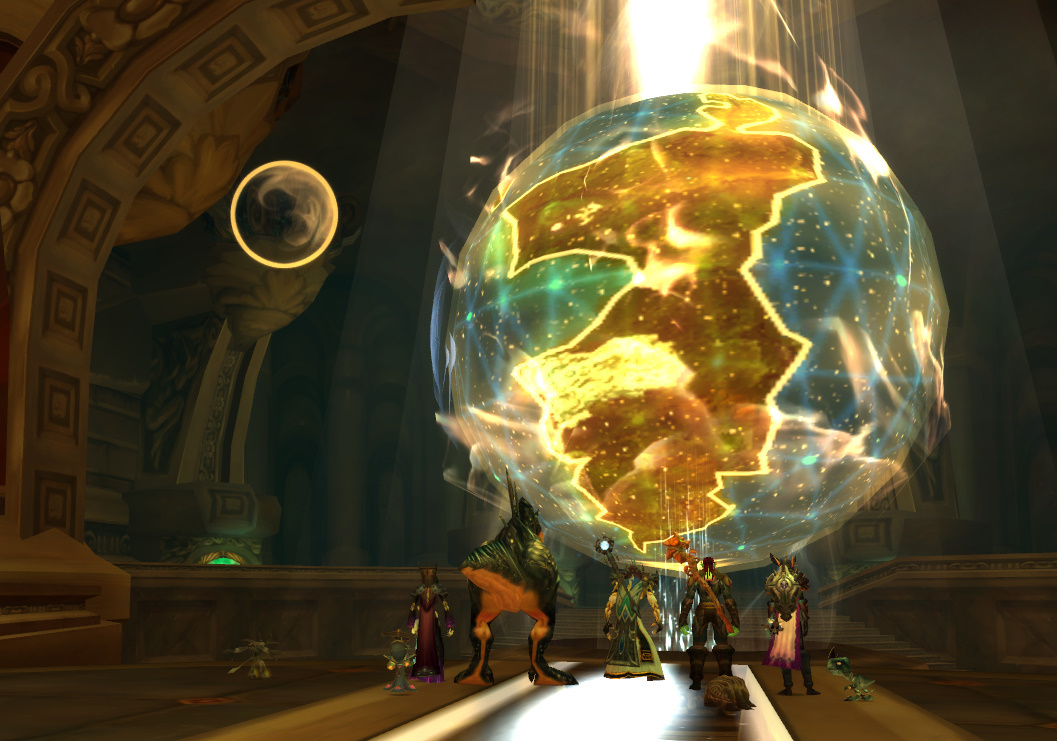 Herald at the End of the World

The Storm Peaks are wrecked by war, with the native aesir and vanir at loggerheads thanks to the meddling of the Titan watcher, Loken. This demigod guardian of Azeroth was slowly corrupted by his own prisoner – an Old God by the name of Yogg-Saron – until his actions brought him into conflict with his vengeful brother, Thorim. His brother’s efforts failed, however, and so it has fallen to the hero protagonists of World of Warcraft to face Loken on his own turf.

A successful group of heroes may fell the corrupted Titan, but this has the unfortunate side effect of dooming all of Azeroth. In his capacity as ‘prime designate’ for the planet Azeroth, Loken happened to possess a large and impressive, holographic armillary sphere. Upon his death, a shaft of brilliant light strikes the sphere and warnings are sounded around the stone halls of Ulduar, heralding the arrival of his superior: Algalon the Observer. The sphere itself serves to illustrate of the fate which now awaits Azeroth’s heroes if they do not intercede further.

This astrolabe-cum-orrery depicts Azeroth and its two moons, of which only one is pictured above. There’s a point of curiosity in the fact Azeroth’s lesser moon, The Blue Child, is actually invisible within the game, and has been since the game’s first expansion (The Burning Crusade) was released. The planetary globe also illustrates an island in the South Seas, mirroring Northrend to the North; this too is a curio, being an as-yet unseen continent [as of 2011 – this land was instated in a later expansion, Mists of Pandaria].

Azeroth is rendered here upon a stylised arrangement of triangular and longitudinal gridlines, which appear to mirror a map of stellar constellations. Coastlines are rendered with a thick outline, but patches of bright colour indicate the high, mountainous regions, such as dwarven Khaz Modan in the Eastern Kingdoms (pictured).

Taken after completing the dungeon (by killing its final boss, Loken) along with four of my guild-mates from Future Tense. We came to use a similar shot for our web banners, as that guild was devoted to exploring the game’s geography and lore.