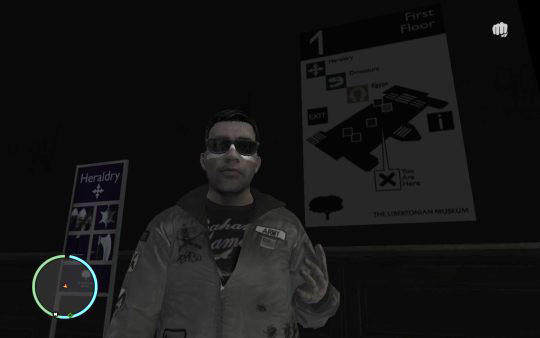 Thanks to ‘Rainbowescapades’ for this second submission, unmistakeably taken during a GTA session given that, to quote:

I was exploring the Libertonian Museum in Liberty City, when I noticed this little gem on the wall… Then I went back to shooting cops and hookers.

I’ve not yet gotten to exploring Liberty City for myself, but given its basis upon New York, we can assume the Libertonian Museum to be a grand venue in the style of the Museum of Modern Art (MOMA) or Washington D.C.’s Smithsonian. It’s closed for renovations at the time of play, with most of its exhibits covered or boxed up, however a sneaky side entrance allows the player in to snoop around. This screenshot (illuminated slightly for improved visibility) shows one of that museum’s floor plans, which can be seen in greater detail below, extracted from a data viewer: 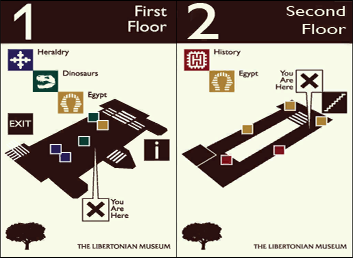 I actually think this is one of the best examples of an in-game maps yet. There’s a sense of authenticity to it, putting me firmly in mind of the British Museum, which employs a similar system. Each exhibit has been given an icon, colour coded for given regions on each floor. Somewhat unusually perhaps, the map describes quite a small amount of floor space, where most museums are broken up into galleries. Still, the fact the viewer’s position is marked on each map makes it easy to follow – as does having such clear signs for the stairs and exit.

A Last Chance for Redemption