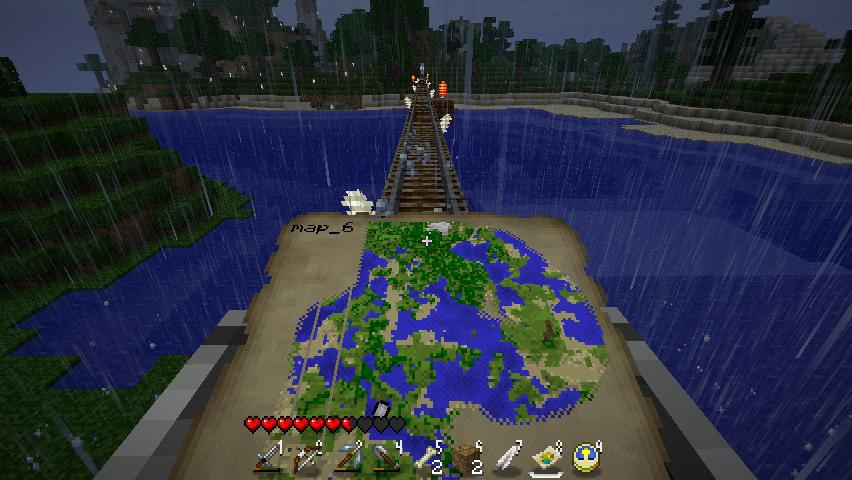 I couldn’t go too far in this project without mentioning Minecraft: one of the few games in which cartography is not only interactive, but is kept as part of the overall game world. Map-making here is delightfully simple: form sugar into paper; assemble a compass out of redstone and iron; and combine the two so you have compass with a paper border. Voila, you have a map which draws itself as you explore the land, whenever the paper is held aloft.

From a Western European perspective at least, Minecraft eschews modern cartographical practice in favour of maps which place east at the top of the page. This is a nod to the medieval manner of alignment towards the ‘orient’, hence ‘orientation’.

Minecraft maps tend to be quite basic, rendering the sample of a 4×4 3D grid area for every pixel on the page, as it would be viewed from the sky. The maps are also numbered, and a position marker is drawn should the player be within the region shown, at any time. This marker moves about, making the maps a very useful tool for extensive burrowing underground.

Taken while travelling on a minecart through a multiplayer survival server I shared with a couple of friends. The usual targeting reticule is hard to avoid without modifying the texture packs; I also took this shot with the map dipped down slightly, to better demonstrate how it is drawn in situ. Not all of the map has been filled in; as the player approaches the edge of a drawn region, that filled-in region will expand until the map reaches the edge of the paper.