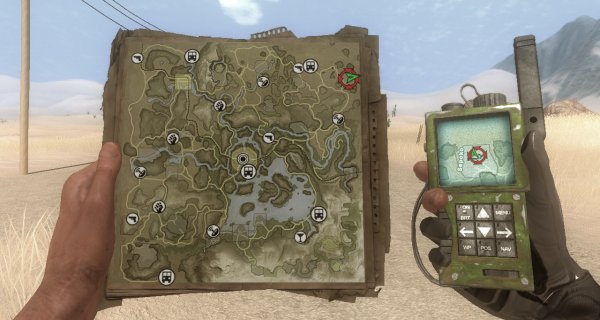 People Need Weapons All Around the World. Why My Home?

Returning to the loosely-defined Far Cry universe, we find Jack Carver in the middle of a collapsed African nation, replete with warring rebel factions. This man has one goal in mind: killing The Jackal. Accompanying him on this mission are a map and GPS read-out, which are presented to the player as part of the environment. Carver can move about the world in real time with these mapping tools held aloft – a mechanic we’ve seen previously in Minecraft – with the map rested on his lap whenever he takes to vehicular transport.

Personally I think this one of the best-looking maps I’ve yet seen in a game. It also appears to be unusually versatile. Its icons are clear, depicting important points of interest such as bus stops, weapon depots, satellite links, rebel compounds and.. a cocktail bar. It’s somewhat harder to work out the true relationship between map and GPS, because the latter has a much higher zoom level. I can only assume that the device’s read-out will rotate in keeping with the player’s point of view, whereas of course the map is locked to one orientation.

Seemingly the only concession to playability lays in an arrow overlaid upon on the paper map, showing the player where they are in relation to anywhere else. This is especially useful for placing the GPS readout in a wider context – a factor which is as true here as it is for real-world, mobile-based maps when compared to a fold-out paper one. 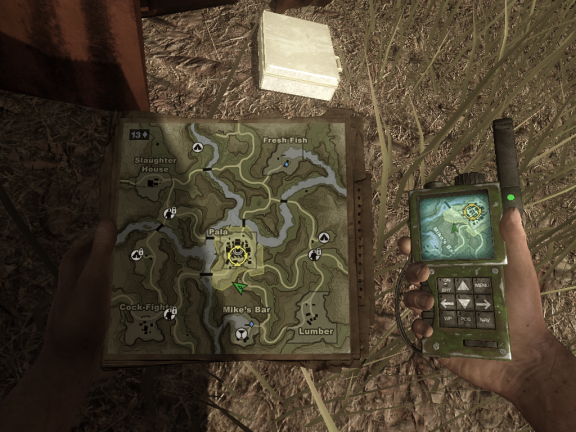 The first screenshot is taken from an article by Jim Rossignol at Rock, Paper, Shotgun. I have not played the game myself.